Skip to content
Date: 23 January 2019Author: lecridespeuples 0 Comments
Statement of the Permanent Representative of Syria at the UN, Dr. Bashar Ja’fari, during the Security Council devoted to the situation in the Middle East, including the Palestinian question, January 22nd, 2019.
Source: https://www.youtube.com/watch?v=5_4FA4VblHg
Translation: unz.com/sayedhasan

Yesterday, the Israeli occupation forces once again committed a series of aggression using missiles targeting the Syrian Arab Republic territories from above Lebanese territories – it was mentioned by my colleague, the representative of Lebanon in great detail. They attacked us from above the Lebanese territories, from the occupied Palestinian territories and from the Sea of Galilee in the occupied Syrian Golan. This was a gross violation of international law, of the UN Charter and of the relevant UN Security Council Resolutions, as well as the 1974 Disengagement Agreement (between Israel and Syria).

These acts of aggression would not have been committed if the Security Council hadn’t failed in compelling the implementation of Security Council Resolutions relevant to the Israeli-Arab conflict over long decades, and were it not for the unlimited support provided by some permanent members of this Security Council to this rogue entity. This encouraged Israel to increase their frequent crimes, violations and State terrorism, away from any kind of accountability, even purely formal. This was demonstrated by the repeated acts of aggression against my country carried out by Israel, and the multifaceted support they provided for years to terrorist organizations.

These acts were not condemned, nor was there any call by the Security Council to stop such acts, in light of the position of the US, Britain and France, who are accomplices and supporters of Israel in such acts of aggression. The policies of these 3 countries and their stances in the UN run counter, in the letter and spirit, to the responsibility they are supposed to shoulder in maintaining international peace and security in line with the international law and the UN Charter’s provisions. The fact that these countries continue to play the role of false witnesses and prevent the Security Council from undertaking its responsibilities will not stop us from exercising our legitimate right of self-defense and work on retaking the occupied Syrian Golan by all means possible.

Recovering the Syrian Golan is an established right for the Syrian Arab Republic. This imprescriptible right is not subject to negotiations, concessions or expiration. The full withdrawal of the Israeli occupying forces from the Golan, to the June 4th, 1967 line is an obligation that shall be fulfilled. It is an unwavering demand based on the principles of international law and the binding UN International Resolutions, including your own resolutions 242, 338 and 497.

Israel feverishly strives to alter this reality, as we have seen today in the Israeli representative’s intervention – he talked about everything, except the Palestinian cause and the Israeli-Arab conflict. Israel feverishly strives to alter this reality, and keeps uttering aggressive statements and undertaking criminal acts, but they are doomed to fail, and will never lead in any form whatsoever to any prejudice against the legal or sovereign rights of my country.

Certain countries have invested heavily in the terrorist war waged against my country, and counted on the situation of some countries in the region to overshadow Arab rights and choke the voices calling to implement the binding UN International Resolutions imposing the end of the Israeli occupation of Arab land. Moreover, these countries tried to achieve gains for the occupation and promote some suspicious deal to liquidate the Palestinian cause and the established and unwavering rights of the peoples and countries in the region.

They tried to ignite artificial strife and stir surrealist conflicts between countries of the region, in order to deviate their attention from the fundamental cause of what’s happening in the Middle East. All this lack of stability, prosperity and development is because of the continued Israeli occupation, Israeli settlements and Israeli massacre of the Palestinian cause.

The past period has witnessed many dangerous and systematic Israeli practices, through which the occupying forces tempted to consolidate their control and impose their will on the occupied Syrian Golan. Let us mention for example: holding meetings of the Israeli government in the occupied Syrian Golan; striving to organize illegitimate local elections there; signing deals and issuing permits to loot the natural resources of the Golan; just recently, looting the properties of Syrians and displacing them to establish a project for wind power generation over around 6000 dunams of land, in some of the surrounding sites around the cities of Magd al-Chams, Ayn Qania, Buqata and Massada; and the continuous settlement activity as well as crimes and daily repression against Syrian citizens under the yoke of the occupation. They arrest them and throw them in Israeli prisons arbitrarily, as is still the case of the activist Sedqi al-Maqet, Syria’s Nelson Mandela, and Amal Abu Saleh. They also subject other Syrians to house arrest. The Israeli officials have also issued repeated aggressive statements, which stress that the occupying power cares neither about international law nor about the Resolutions of your Council, and intends to continue its occupation.

Unfortunately, all these issues and their rejection by our people in the Golan did not catch the attention of the Special Coordinator, Mr. Mladinov, so that they could be included in his monthly briefing to you. Worse, he avoided on purpose to call things by their names. He talked to us about about the side “Alpha” and the side “Bravo”, as if each of you knew what means Alpha and what means Bravo [1]

We are pragmatic and we know the differences in the political stances of the members of this Council. However, we call upon you to focus on the common ground that joins us, that is the international law, the UN Charter and the Resolutions of this Council of yours. Thus, we stress the necessity for the countries supporting Israel, its policies and stances to review their approach, to stick to that common ground that I have touched upon now, and to work towards the restoration of the legitimate rights to their true owners in line with the binding UN International Resolutions and the internationally recognized bodies. Otherwise, the destiny of this international organization will be just a repeat of the failure of the League of Nations for the same reasons.

Let us remember that many of the calamities suffered by our country came due to the violation of international law and of the UN Charter, through the constitution of illegitimate coalitions like the ones which targeted Irak, Libya, Yemen, Syria and others, and due to call for meetings that bypass the Security Council, like this Warsaw Meeting [called by the US against Iran], or the Middle East Strategic Coalition known among intelligence experts as the NATO of the Middle East. All these coalitions are made outside the UN Security Council.

This begs the question : from where do such coalitions and meetings gain their legitimacy? Are international relations governed by international law and the UN Charter upon which the founding fathers strove to agree? Or are they governed by the will and the destructive agendas of some countries? Are we not correct, Mr. President, to warn that this organization might end up just like the League of Nations if we do not hold a stance against the policies of these countries? The absence of a UN sponsoring of the Warsaw meeting clearly shows that such an approach will not manage to resolve anything, and won’t realize what was announced by the organizers themselves, namingly the drafting of a common strategy on the Middle East. They said themselves that the Warsaw meeting meant to draft a common strategy on the Middle East.

My country expresses its firm and principled position supporting the rights of the Palestinian people for self-determination and independent statehood over all its territories with Al-Quds (Jerusalem) as its capital, and the right of return of the refugees in line with Resolution 194 of 1948. We renew and stress that any measures that would prejudice those rights are null, void and rejected, and will only escalate tensions and threaten peace and security in the region and in the world.

To conclude, Mr. President, I tell those who are trying to redraw the maps of our region along their own whims that our people, who stood against the unprecedented international terrorist war imposed on us, will also stand against such evil plans, and will thwart them just as he thwarted others over decades.

Donate as little as you can to support this work and subscribe to get around censorship. 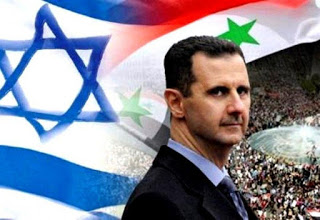 [1] Here is how Nickolay Mladenov, UN Special Coordinator for the Middle East Peace Process, briefed the Security Council on the Israeli aggression, at the beginning of the session:

“On the occupied Golan, the ceasefire between Israel and Syria has been maintained with relative calm and low levels of military activity in the areas of separation and limitation on the Bravo side. UNDOF attributes this activity to controlled detonations of explosive ordnance as part of clearance conducted by Syrian security forces. The relative calm in the UNDOF area of operation was interrupted by events that occurred on 25 December and most recently on 20 and 21 January.

On 25 December, UNDOF observed a helicopter on the Alpha side fire four rockets that impacted on the Bravo side. On that day, UNDOF also heard and observed surface-to-air missiles, anti-aircraft defense guns, rockets and heavy machine guns fired on the Bravo side but could not observe the points of origin or impact.
On 20 and 21 January, UNDOF observed and heard an increase in air activity over, and firing of missiles into, the areas of separation and limitation on the Bravo side. UNDOF liaised with both sides to de-escalate the situation. The observations of military activity coincided with open source reports of Israel’s confirming that it had conducted a series of airstrikes on targets in Syria in response to a missile fired from Syria intercepted by Israel.
Such events demonstrate the volatility of the area and risk jeopardizing the long-standing ceasefire between the two countries. It is critical that both parties to the 1974 Disengagement of Forces Agreement respect the Agreement at all times to prevent escalation across the ceasefire line and actions that undermine progress towards stability in the area.”
See also: How Syria Thwarted Two Israeli Attacks in 24 Hours