Please write to Vimeo (legal@vimeo.com) to protest this decision.

On February 28, 2020, Vimeo arbitrarily deleted my channel ‘Sayed Hasan‘ which, since the deletion of my Youtube channel in December 2017 (followed by my Facebook pages in May 2019), published my French subtitled videos —extracts from speeches from Hassan Nasrallah, Ali Khamenei, Vladimir Putin, Bashar al-Assad, alternative anti-imperialist documentaries, Al-Mayadeen or Russian TV News Bulletins, etc. Thus, two years and two months of work, 400 videos posted and 600,000 views, which is not negligible in view of the fact that Vimeo is marginal vis-a-vis the giants Youtube or Facebook and their quasi-monopoly, went up in smoke.

This is not Vimeo’s first act of censorship. In June 2019, the Project Veritas account was banned following the publication of its exclusive investigation into Google’s ideological censorship, the first part of which I captioned.

And most recently, in April 2020, at the heart of the coronavirus pandemic, Vimeo censored a documentary denouncing the influence of lobbies on the World Health Organization (WHO).

The Vimeo platform, for which I had to pay an annual fee of 84$ to post my videos, therefore did not prove to be safer than Big Tech, on the contrary: while Youtube has a system of three warnings, largely biased anyway, Vimeo deleted everything without warning, simply informing me in these terms: 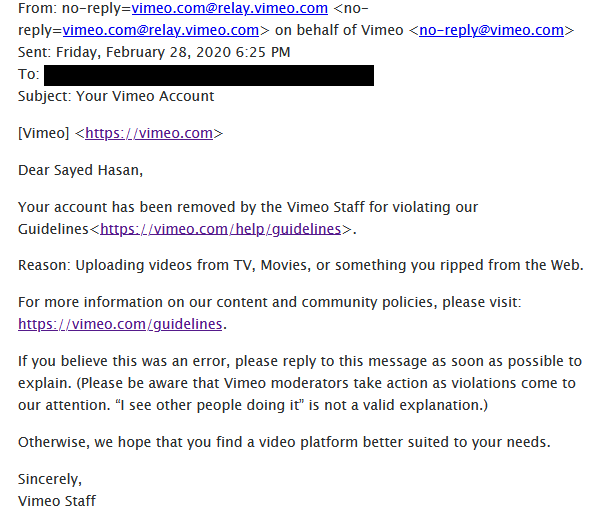 The reason invoked was grotesque, as no part of the Vimeo Guidelines mentions such a prohibition. The only rules that applied were the —classic and legitimate— Copyright and Fair Use, so I protested to Vimeo on March 9, pointing this out: 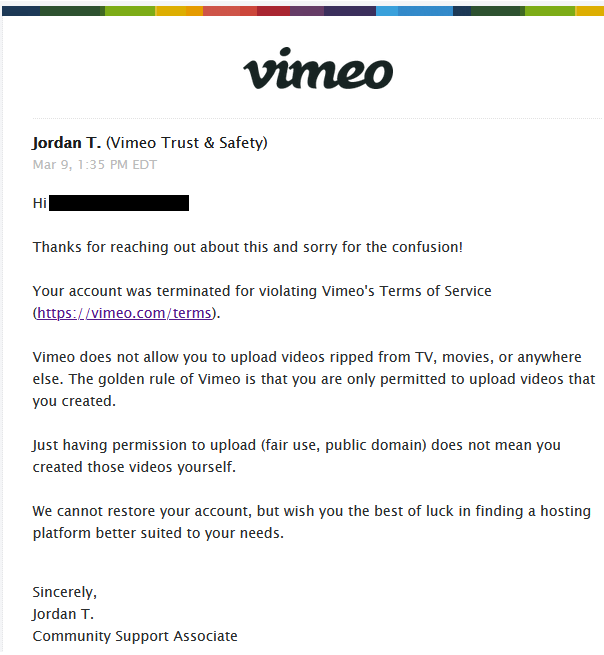 The absurdity and the contradiction were obvious: on the one hand, it was no longer the Vimeo Guidelines that were invoked, but the Terms of Service (note Vimeo’s hypocritical apologies for this ‘confusion’), which don’t make any mention of content from TV or the internet. On the other hand, the original pretext of theft or plagiarism is completely disconnected from the only questions relevant in this regard, namely respect of Copyright and Fair Use, to which long sections of the Vimeo Guidelines are devoted. But Vimeo manages to affirm that even by respecting these rules, my content could not be published because it would not be a 100% original creation, which is absurd, discriminatory and would empty the sections devoted to Fair Use of any interest. I reacted in these terms on March 23:

Vimeo refrained from answering for more than 2 weeks. It was only after Professor Norman Finkelstein intervened on my behalf on April 6 that they deigned to answer him (within two hours). 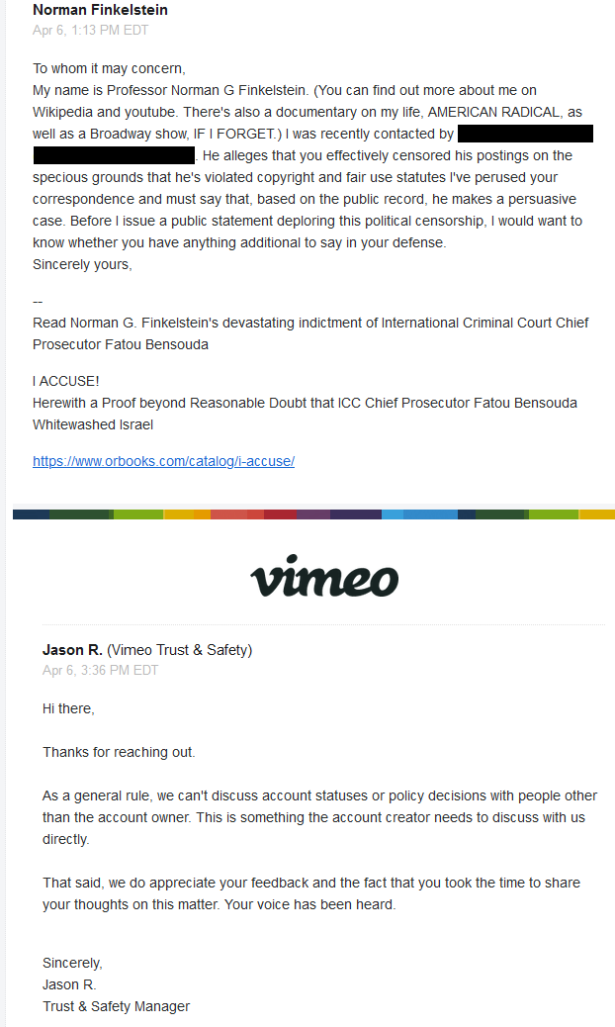 I sent a follow-up email right away: 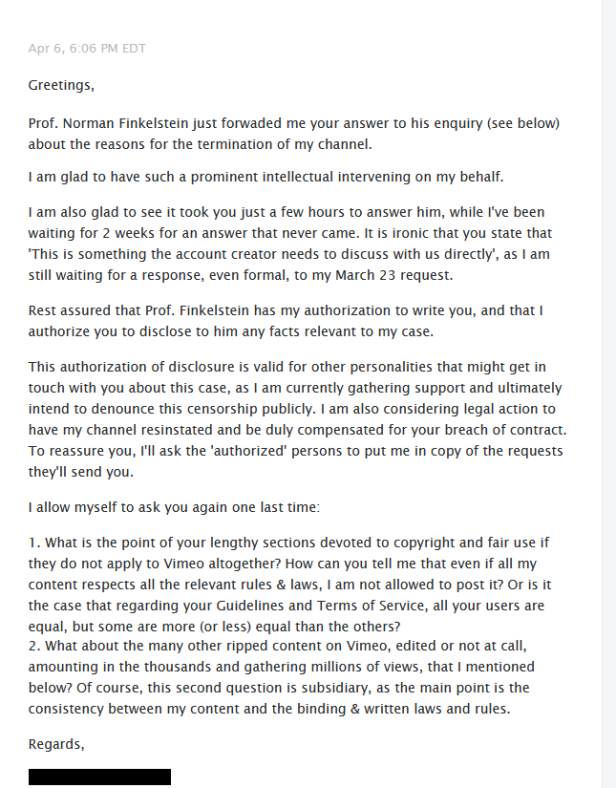 “Jason R.” —the careful anonymity of the censor evokes the hangman’s hood— from Vimeo responded on the same day: 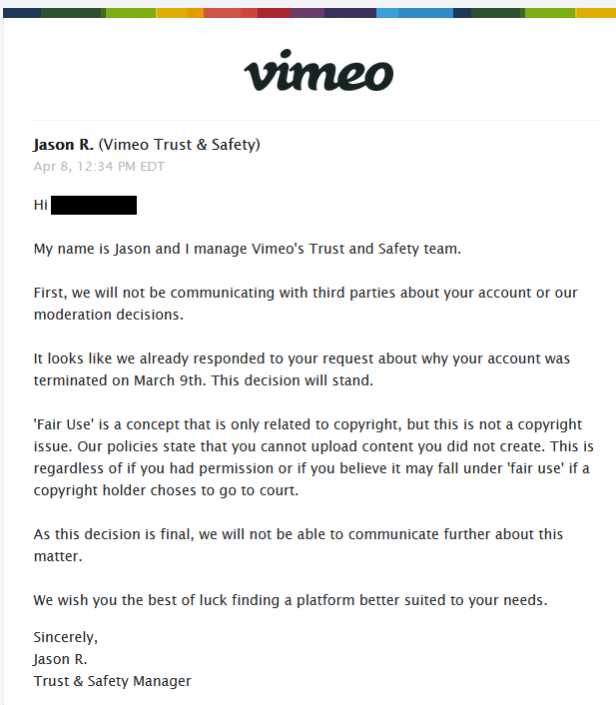 I replied to this email empty of substance on April 8: 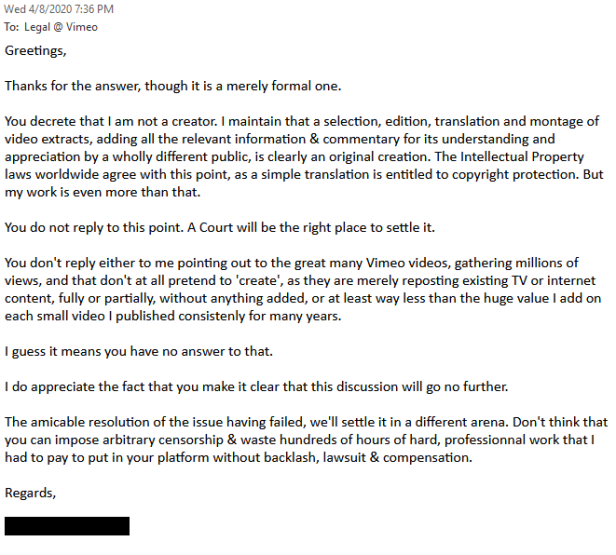 Of course, launching a lawsuit would require resources that I do not have, unless a lawyer or a Civil Liberties association agrees to do them at little cost. I nevertheless ask all those who can to write to Vimeo (legal@vimeo.com), putting me in Bcc if possible (contact@lecridespeuples.fr) to protest against this decision, and share this article widely. It should be noted that at least one lawsuit is currently underway in the United States against Vimeo for freedom of expression issues, a pastor having had his account deleted for having mentioned his renunciation of homosexuality and his journey to God.

This is neither the first nor the last time that I have to start from scratch after years of hard work, when they were bearing fruit. Faced with incessant censorship, which will increase as we approach the inevitable Liberation of Palestine, the only sure way to follow Resistance News is to subscribe to the Newsletter, which is also an important act of support. Please do so and invite your friends to do it.

Finally, those who can are invited to make a donation to help this volunteer work.

My videos in English are accessible on Dailymotion and are safeguarded in the Unz Review.

Everything having been said in two previous articles (Kafka 2.0: how political censorship is exercised on Youtube & Freedom of expression, Hassan Nasrallah and other victims of censorship on the Internet), I will conclude again with Norman Finkelstein’s statement of support when my Facebook page was deleted:

“It is a scandal that the speeches of Hassan Nasrallah are banned on Youtube. Whatever one thinks of his politics, it cannot be doubted that Nasrallah is among the shrewdest and most serious political observers in the world today. Israeli leaders carefully scrutinize Nasrallah’s every word. Why are the rest of us denied this right? One cannot help but wonder whether Nasrallah’s speeches are censored because he doesn’t fit the stereotype of the degenerate, ignorant, blowhard Arab leader. It appears that Western social media aren’t yet ready for an Arab leader of dignified mind and person.”

The online intifada to which Hassan Nasrallah called continued. As he keeps saying since May 25, 2000, the time for victories has come, and the time for defeats is well and truly over: this is why his word is mercilessly hunted down —ironically, on Youtube, the Israeli channel i24 News is the main source still available for his speeches, all the others having been suppressed: the Zionists will even try to make a buck out of the rope to hang them! Repeated censorship is an eloquent sign of the importance of this work, and, far from discouraging me, it will only motivate me more.

An ominous prediction, especially with the Covid-19 pandemic and its huge toll on the United States

Donate as little as you can to support this work and subscribe to the Newsletter to get around censorship.

“Any amount counts, because a little money here and there, it’s like drops of water that can become rivers, seas or oceans…” Hassan Nasrallah